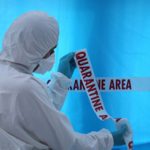 A member of the public has suggested asbestos found this week at Stromlo Forest Park may be from ruins of a hut that was built almost 60 years ago.

The man, who did not want to be named, said he had been walking the trails on Mount Stromlo for many years and the asbestos could have originated from a now-ruined structure known as Magnetic Hut.

The Australian National University website says the hut, the first paleomagnetic laboratory on campus, was built in 1955 and was a ”long, timber-frame structure clad in weatherboards”. Sections of the hut were removed in the 1970s.

Small pieces of bonded asbestos were found on a cycling track at Stromlo Forest Park. The results of soil and air tests are due by the middle of next week. The track has been closed.