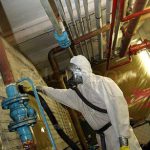 Concerns have been raised over Crown Casino residents’ possible exposure of to asbestos and other toxins.

Asbestos and other materials were reportedly unearthed four months ago while work was being done on a southern parking lot project for the casino complex.

Locals allege that despite the work being halted back then, the Health Department was only informed of the contamination recently when residents informed authorities.

“Nearby residents, Crown patrons and hundreds of park users have potentially been exposed to the excavated sand since November with no public warning or even signage,” resident Jeff McCann said, adding that authorities had confirmed to him that asbestos was present.

“Attempts to cover the sand piles with mulch look to be ineffective (and) several questions arise, why the secrecy?  Warnings should have been issued. Why was the Department of Health not notified sooner?”If the excavation from a relatively small sample of the former Peninsula rubbish tip has revealed asbestos and other toxic wastes, what the hell will be found when the entire golf course is excavated for Crown’s hotel and the stadium?”Given the latest discovery, the Environmental Protection Authority should now do a complete study on the whole development site, both for the proposed six-star hotel and the Perth stadium.”

A Health Department spokeswoman stated that work on the site had ceased in early November 2012 upon the discovery of the contaminated materials.

“At the request of the Town of Victoria Park the WA Department of Health inspected the Burswood site on Tuesday, February 5 to assist them to determine any potential health risks,” the spokeswoman  said.

“At this time, no risks have been identified.

“When work was stopped, all stock piles were sprayed with hydromulch, an acceptable protection strategy.”

The spokeswoman revealed that the preliminary visual inspection  failed to identify any “exposed” asbestos and that “at the current time” there appears to be no public health risks to people nearby parkland, the casino or residents.

“The Department of Health’s inspection did not observe any uncovered stock piles of potentially contaminated materials,” she said.

But the spokeswoman stated that the department had requested a more extensive investigation of certain parts of the site which had been left undisturbed “to establish if there is anything of concern from a health perspective and if so how best it be managed”.