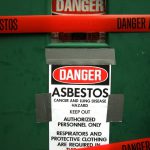 Between 30 and 40 thousand Australians are expected to die from asbestos-related diseases in the next two decades, a Senate inquiry has heard.

The Inquiry into the Asbestos Safety and Eradication Agency Bill included evidence from Hobart with a vast range of groups who have experienced the deadly building material.

According to David Clement from Asbestoswise, the age of mesothelioma patients is dropping — meaning patients are becoming younger. Clement has attributed this to the growing number of young people who are carrying out home renovations.

Despite widespread ignorance among DIY renovators about the risks, most efforts to increase asbestos awareness for DIY home renovations have all but failed.

“The story we have with home renovations shows is that we have been banging on their doors for years trying to get on,” Mr Clement said.

Simon Crocker, from Asbestos Free Tasmania, said about 12 people a year in the state died from asbestos-related disease.

He said it should be a legal requirement that sellers disclose whether homes contain asbestos.

“We believe that if somebody knows they have asbestos in the house then they should disclose that at the point of sale,” he said.