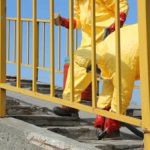 Refurbishing at the Telstra Building in Deakin, was stopped after WorkSafe ACT and the Environment and Sustainable Development Directorate issued stop-work notices to the contractor for breaches connected to the discovery of asbestos on the site.

The contractor, Business 2 Business Commercial Fitouts (based out of Sydney) shut down the site following the inspection.

Dean Hall, ACT branch secretary of the CFMEU, reported that in addition to the building’s asbestos register  being inaccurate,the correct process of an asbestos audit and management plan were not followed by the contractor.

A Telstra spokesman stated that they were   ”aware that a contractor working on behalf of Telstra found some asbestos at a vacant part of the Telstra site”.

”The contractor took immediate action to ensure the safety of their employees … [and] is now working with appropriate authorities to ensure the site remains safe for anyone who works there.”

A spokesman for the ESDD said ”The head contractor did not have the appropriate licence, the asbestos removalist is licensed in the ACT. However, there were no approvals in place to undertake the work. None of the work on the site had the relevant approvals.”

It is unclear how long the site with be closed considering the number of approvals required.