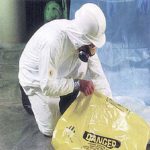 Bushwalkers have made an unsettling discovery in bushland near Bucca.

A heap of dumped asbestos sheeting has been uncovered in the Blackbutt Natural Regrowth area.

“We could not believe someone could be so criminally irresponsible,” Ms Hope said.

“Dumping asbestos carelessly like that poses all sorts of dangers to the public and potentially wildlife.

The culprits responsible are subject to a fine of up to $1-million for the illegal dumping of the hazardous material.

An inspection of the site  revealed that the dumping had been done very recently. Those responsible would’ve traveled along the Bucca road so investigations are being conducted.

NSW Forestry, the Coffs Harbour City Council and State Member for Coffs Harbour Andrew Fraser  has been informed of the incident and inquiries are ongoing.