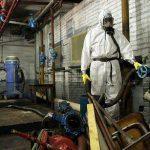 Rumours that a community in regional NSW was consistently exposed to deadly asbestos waste because of council safety breaches, have been shot down by Gwydir mayor John Coulton as “unfair and misleading”.

Asbestos Disease Foundation president Barry Robson made a trip to Warialda to investigate allegations that workers had been exposed to asbestos fibres during a water pipe replacement project earlier in the year.

Some report that council management had advised staff to describe broken asbestos sheeting as “general waste” when it was dumped in an effort to avoid higher charges.

Robson has no doubts that staff needed better training, and called on WorkCover and the NSW environmental Protection Authority to look into the matters.

Robson called it “completely unacceptable” that workers  and community members in suburban streets were being put at risk.

Coulton stated that he was confident that no staff  or community members were put at risk of asbestos exposure. He added that he had “no knowledge” of any safety breaches at the dump site.