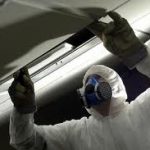 The Department of Mines and Petroleum is examining the state of asbestos contamination in the Pilbara mine site.Rio Tinto confirmed that brown asbestos was uncovered at the West Angeles mine site last month.

The contamination in question was revealed when fibres were identified in material submitted from Holcim Quarry. A spokesperson for Rio Tinto indicated that the exposure levels were below OHS exposure limits but employees were swiftly informed of the dangers.

The Holcim quarry has voluntarily halted their operations and a  preliminary report on the site is due to be submitted shortly.

BHP have subsequently isolated material at another mine site near Meekatharra, following allegations that workers could have been exposed to asbestos. Key industry players have also been called to gather at the company’s behest.

A spokesperson for BHP said tests are currently underway and the safety of workers is not in jeopardy.  CFMEU safety officer Steve McCann claims to have spent three days investigating asbestos following calls from reports from several concerned workers.

McCann is worried that workers will continue to be exposed to the deadly substance while the investigation continues.