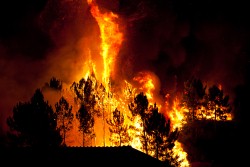 Massive bushfires are raging in NSW this month.

A state of emergency has been declared in New South Wales this month, as high temperatures and strong winds fuel massive bush fires that have already claimed one life and left hundreds homeless.

As firefighters battle to keep the flames under control, the WorkCover Authority of NSW has issued a warning about another danger that has arisen as a result of this terrible ongoing tragedy.

According to WorkCover, homes damaged or destroyed by these bushfires may contain asbestos fibres that could be extremely dangerous if handled incorrectly.

“As firefighters and other emergency services workers assess the damage, and residents begin to repair or rebuild, we want to make people aware of the danger of asbestos,” said WorkCover NSW Work Health and Safety Division General Manager John Watson.

Any NSW resident who is at risk of coming into contact with asbestos has been advised to avoid disturbing the material, and to keep any debris that may contain asbestos wet until it can be seen to by a professional.

WorkCover has announced that it will be fast tracking asbestos assessments in the aftermath of the bush fires by waiving the five-day asbestos removal work notification timeframe.

This will ensure that any buildings creating a potential asbestos exposure risk can be assessed by a licensed WorkCover asbestos removal professional, as soon as possible.

Meanwhile, NSW Premier Barry O’Farrell has offered his condolences to the family of the man who suffered a fatal heart attack during the bushfires last week – the only confirmed fatality of this disaster so far.

He noted that, given the hostile conditions, it was a testament to the professionalism of the local fire authorities that there has not been a greater loss of life.

“I have spoken to the Prime Minister and I can assure all affected communities that everything is being done by the State and Federal Governments to get urgent help to people needing assistance,” said Mr O’Farrell.