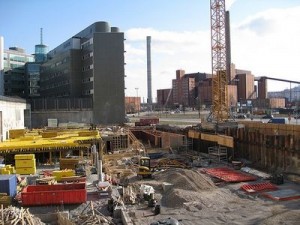 It appears that despite changes in the law and work training programs, the construction industry in Australia continues to be a dangerous profession, as protesting workers and their family members are stepping up to point out.

In Canberra, 600 construction workers joined a march led by Mrs. Catanzariti, whose 21 year old son Ben was killed on a Canberra work site in July, protesting the unsafe work conditions on Canberra work sites that have resulted in 4 deaths in the last 10 months. Mrs. Catanzariti made clear that the loss of her son has broken her family, and that she is determined to stop other families from having to experience the kind of loss suffered by her family.

CFMEU ACT branch secretary, Dean Hall, called on the ACT government to place greater emphasis on safety rather than awarding contracts to lowest bidder on Civil contracts. Attorney-General Simon Corbell, ACT Greens MLA Amanda Bresnan and Canberra Liberal Vicki Dunne all joined together at the rally to all throw their support behind the inquiry now underway to look into workplace safety in the territory.

On Friday October 21st hundreds of workers in WA stopped work in protest of unsafe working conditions on a Nedlands construction site when a two tonne crane block and 50 meters of rope fell to the ground, narrowly missing several workers who were standing nearby.

According to CFEMU state secretary, Mick Buchan, workers are concerned with a crane at the site that has continually broken down and has had winch issues. Despite knowing of the these issues, the company has failed to conduct any investigation into the crane’s malfunctions. However, in light of this latest issue CFEMU reports the company has agreed to seek a report by an independent engineer into this latest issue as well as some of the past complaints.

These two protests shed light on continuing safety issues in the construction industry and what can occur when companies weigh their need to make a profit against the safety of their workers. However, as long as workers and their families are willing to stand up and stage protests highlighting the areas where dangers exist there is hope that things can change as more and more companies are forced to take a good hard look at the need to ensure safety on these work sites. It also makes clear that more safety checks by the government may need to made to ensure that dangerous situations are resolved before another worker is injured or killed.