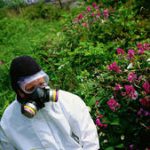 Citizens of Canberra may never know the extent in which asbestos was dumped throughout the ACT. Health authorities said the outrage and hysteria that surround certain discoveries vary because of the various levels of risk. Asbestos assessor Frank Poole stated that a significant amount of asbestos remains in old housing from when workers were building the national capital, which was later knocked down and buried.

During the second World War, fibro structures such as POW and military camps were swiftly constructed with the use of asbestos sheeting. When the war ended, it is alleged that instead of retaining the sheeting, the structures were just knocked down.

Poole said that there were no records indicating where builders dug holes to dump asbestos. People can be unexpectedly be exposed to the dangerous substance from worn friable asbestos in an old air-conditioning unit or from dust from renovations.

Most recently, asbestos has been uncovered at Lyneham sports precinct as well as units at Kingston Foreshore. Houses built prior to 1985 in most suburbs have a very high chance of containing asbestos. Asbestos fibres can gloat in the air for a long time, where they can potentially be inhaled. Asbestos exposure can lead to lung cancer, asbestosis, and mesothelioma.