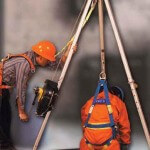 Three injured workers were sent to Perth for medical care after all three of them suffered from injuries at a mine site near Leinster. The men landed at Jandakot Airport and were immediately transported by ambulance to the Royal Perth Hospital.The men’s injuries are considered serious but non-life threatening. The Royal Flying Doctors Service was requested by the mining town following the injury of the three men.

One man is alleged to be suffering from chest injuries after rubble fell upon him. He suffered from bruising and soreness as well as a serious ongoing injury and possible spinal problems. Another worker is said to have suffered a broken arm and possibly spinal injuries, while the last worker has suffered a serious fracture to his leg. All three men remained conscious throughout the ordeal however.

All three men were working in the underground Agnew mine when coils of mesh fell upon them, causing injuries.Mine inspectors are expected to reach the site soon in order to commence an investigation.