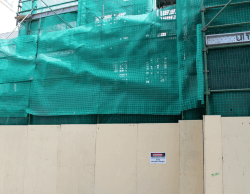 A construction company was fined over an employee injury.

A building firm in North Yorkshire in England has landed in court after its OHS negligence resulted in a worker suffering multiple injuries.

Upon investigation, the Health and Safety Executive (HSE) revealed that the injured employee was commissioned to work on the mezzanine floor of a building, using a saw to cut through the metal sheets of the floor.

The worker suddenly lost his balance and fell four metres through a hole he had cut, fracturing his skull and breaking eight ribs.

Although the worker has since been able to return to work, his employer was fined AUS$27,000 and ordered to pay AUS$13,200 in fees for failing to implement adequate construction safety standards.

The court heard that the employee and a colleague that was working on the site were provided with unsuitable safety harnesses, and neither had been trained on how to use them properly.

In addition, the HSE reported that the company did consider installing a safety platform to protect the workers in case of a fall, but decided to not go ahead with it in order to save time.

HSE Inspector Andy Denison expressed his concern at the continued negligence of construction firms around the country.

“It is shocking that some construction firms – which are well aware of the high levels of death and injury in their sector as well as the risks involved – are still not fully considering the safety of site workers,” he said in a November 5 statement.

“There were many failings by [the building company] that HSE discovered. They had not properly assessed the risks of the job; they didn’t provide the correct equipment to allow it to be done safely; adequate training was not given to the two men; there was no supervision, and they failed to take suitable precautions to prevent a fall.”