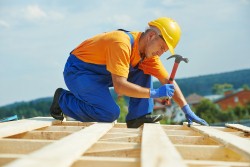 A building firm has been fined after a worker was seriously injured.

A building company in London has been hit with a heavy fine after an employee was severely injured due to poor OHS compliance.

In its investigation, the Health and Safety Executive (HSE) found there was a concerning number of factors that led to the incident – all of which were easily preventable.

Firstly, it was revealed that the employee was working at an unsafe height without the required safety measures. The company admitted that in order to “keep the workers busy” while waiting for scaffolding to arrive, they were set to work before the proper safeguards were implemented.

The accident itself occurred when a newly-laid first floor collapsed under the excessive weight of concrete blocks. These blocks weighed around 1.6 tonnes in total – more than seven times the load capacity of the floor, the HSE found.

When the floor buckled under the weight, the worker fell three metres and sustained multiple leg fractures. He is still unable to return to work, let alone walk properly, even though the accident occurred in September last year.

HSE Inspector Keith Levart condemned the negligence of the company and reminded those in the building industry about the importance of construction site safety.

“[The employer] did not pay enough attention to the tasks being undertaken and failed to fully appreciate the risks involved,” he said in an October 30 statement.

“For this reason, it is hugely important that if something alters on site, such as materials being late, managers must take the responsibility to re-assess the risks and make sure there are no unintended – and possibly fatal – consequences.”

If the company in question had taken part in proper construction safety training, it is highly unlikely such a devastating accident would have occurred.