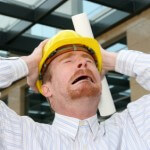 Another accident has occurred at a site that union bosses have declared as a “tragedy waiting to happen”.  This time a 40-tonne crane collapsed to the ground, mere metres away from construction workers who were working on the $50 million Mt. Sheridan Plaza redevelopment project.

This is not the first time Workplace Health and Safety officers have had to investigate a construction safety incident occurring at this site. A man was hospitalized in June 2011, when a concrete slab fell upon him.Fortunately, no one was injured when the crane crashed to the ground, but workers have halted the operation of tools until inspectors have granted an all-clear to primary contractors, Broad Construction.

Electrical Trades Union organiser Stuary Traill stated that the site was the worst he had seen during his tenure as a union officials, and workers were growing extremely impatient with the poor safety standards of the site.

Traill said that an audit on the site that took place prior to Christmas, indicated that serious breaches of safety legislation. were present . Traill continued, stating that it seems as if Broad Construction only takes safety issues seriously when an incident occurs and investigators show up.Criticism has arisen of the company “cutting corners” to get the job done quickly.

Broad Queensland’s general manager John McCann stated that an “exclusion zone” was organized through the crane and workers were now able to return to the site.

Traill however, has criticised the company for the length of time it took for them to close the site when the crane fell. He stated that the workers were told to keep working around the fallen crane, despite safety concerns. He said that workers will continue to work there despite their construction safety concerns because they need the work.