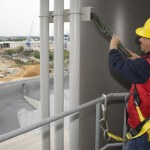 The construction union claims that half of the construction safety incidents that occur on Canberra work sites are not being reported properly.The 2011 workplace safety legislation, the Work Health and Safety Act 2011 requires employers to report all injuries incurred at work as well as near-misses.

Dean Hall of the CFMEU stated that a lack of reporting of incidents is a continuous problem, especially in the civil construction sector.Hall believes the issue is extremely concerning, as he believes approximately half of the injuries in the construction industry are inefficiently reported or not reported at all.

In December 2011, a 43-year-old worker suffered serious spinal injuries after a roller he was driving roller over at a housing development.The CFMEU believe the incident was not effectively reported, thus the union is calling on the ACT work safety commission to apply charges against the contractor responsible.

The company allegedly reported an incident involving a roller but did not indicate that any injuries occurred.

Hall believes the industry is presently plagued by dodgy contractors. He stated that the contractors are likely performing irresponsibly on numerous levels with a lack of safety system or protection for workers in the workplace. Thus, Hall believes that businesses fail to report accidents or serious injuries because if WorkSafe inspectors investigate an incident they may find other serious problems in the safety infrastructure of the work sites.