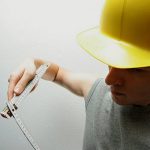 Three construction workers were awarded for their bravery after a crane was engulfed in flames and began to collapse inner Sydney last month.

Workers were cleared from the site and the road close-by was closed after the fire at the construction site at the University of Technology Sydney.

Glen May was operating the crane and  was fortunately able direct it away from busy streets  before the arm came crashing down.

Fellow employee, Nuno Nunes, helped guide May to safety while Gordon Cameron, the site’s construction union delegate, cleared the area of all civilians and workers.

The men received their awards at  the inaugural Joes Owens Bravery Award at Sydney Trades Hall.

“Today is a significant day because we acknowledge three heroes of the building industry,” Mr Robertson said.

“I would do the same again. I’ve worked with Glen for a while and there’s nothing I wouldn’t do for him,” Mr Nunes said.

The WorkCover Authority of NSW continues to  investigate the incident.