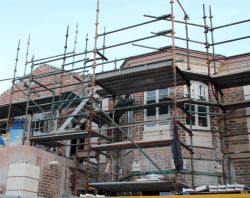 Any renovation work must be preceded by a thorough asbestos check.

A council body and a decorating firm in the UK have both been fined after exposing workers to dangerous asbestos fibres.

The Health and Safety Executive (HSE) reported on October 31 that the council had enlisted the services of the decorating firm to refurbish a community centre last year.

Instead of allowing a licensed contractor to remove the building’s asbestos insulation boards under controlled conditions, the council sent staff from the decorators to perform the work. The hazardous material was subsequently spread around the site by the staff, posing a serious threat to everyone on site.

HSE Inspector Paul Cooper offered his judgment on the matter, which is especially pertinent to industries in Australia as national Asbestos Awareness Month gets underway.

“Refurbishment and demolition work must be planned and carefully thought through, especially where asbestos may be present,” he said.

He noted that the council should have planned its work better to eliminate the risk of asbestos exposure to workers, and the decorating firm should also have undertaken an assessment of the risks posed by its work at the centre. Instead, it had failed to fulfil “its responsibilities as a contractor and employer to protect those on site.”

“As a result of these failures [the decorating firm’s] employees, and potentially other tradesmen on site, were exposed to harmful asbestos fibres,” Mr Cooper concluded.