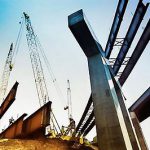 A shipping container packed with a significant amount of steel smashed into the deck during the loading process.  A crane operator allegedly attempted to squeeze the 12m (plus) container into a small space on Sea Lion at Toll Perkins ship yard.

Reports stated that an exposed hydraulic hose was struck and severed, causing pressure to the crane to drop.

Maritime Union NT organiser Thomas Mayor  recalled that it was the third incident of its kind on Darwin wharves over the last 2 years .

“That’s three times too many,” he said, “There were people in the danger zone when the container dropped – it’s lucky no one was killed or maimed.”

The foreign-flagged ship is contracted to run between Darwin and Gove.

“HA worksafe! the toothless dog, all bark no bite! the unions have no power they have proven that time and again they just rub shiny patches with their useless arses into their leather office chairs! one thing is for sure is that these big companies dont care their OHS might as well be written on the dunny roll in the public toilets, thats all their good for! ”

Mr Mayor, who said the route traditionally belonged to an Australian ship and crew, raised fears Sea Lion did not meet NT regulations.

“A lot of ships register in other countries to avoid tax and basic regulations,” he said. “We hope to see an Aussie ship back on the run soon.”

Toll Perkins Darwin spokesman Christopher Whitefield did not respond to questions by the time of publishing.