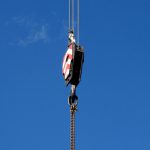 The inspections which were poised to begin later in 2013, have since been pushed ahead, WorkCover NSW said in a statement.

The rescheduling comes after a crane at the University of Technology Sydney (UTS) site at Broadway became engulfed inflames, before the cables gave way causing the whole thing to collapse

Fortunately there was no one hurt in the incident and  the crane crew was praised for saving the lives of building workers and the public.

Responding to the incident, WorkCover NSW  stated tower crane verification inspection program will start with the type involved in the Sydney collapse.

The inspections will examine existing risk controls such as crane pre-assembly and pre-use inspection systems.

A physical inspection of the cranes will also occur.

‘The Sydney CBD crane collapse had never happened before and at the time of the incident was considered extremely unlikely,’ WorkCover General Manager John Watson said in a statement.

‘WorkCover’s thorough investigation into the causes, systems of work, maintenance of equipment and adequacy of control measures is continuing.’

More info on Cranes,hoists and slings