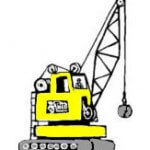 An almost completely collapsed crane came very close to crashing through residential buildings until it was removed.The thirty-tonne crane was attempting to load material for a pool into a backyard when it lost its stability and nearly collapsed into the homes.

The crane did however crash through a carport, causing damage to pool, fence and guttering.Fortunately, two additional cranes were added to the scene to help lift crane out of danger to residents and their homes.
Top of the crippled crane was subsequently removed. Residents of the neighbourhood claimed that workers were working on the rig for majority of the morning.The owner of the pool is grateful that no one was injured in the incident.

It is currently unclear as to what caused the crane to collapse.

Learn More About Working at Heights