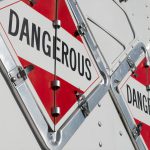 Emergency services rushed to the scene upon receiving reports of spilled chemical and vapour cloud emanating from the area. Queensland Fire and Rescue Spokesman said paramedics were on the site helping and treating the four individuals who were injured in the leak.

Reports indicated that the four workers weren’t seriously hurt but they are seeking treatment.

A Hazmat crew and scientific officer also joined the fire services at the scene. The leak is said to be under control and it is still undetermined how the leak was caused.

This incident follows the Boral Asphalt factory explosion.  The massive factory explosion rocked Narangba  and caused black smoke to be visible from a significant distance away.  Reports on how the factory explosion were also sketchy but fortunately all workers were accounted for. Boral is currently investigating an explosion that caused a fire at one of their plants in Queensland.

Six workers for the Boral plant were given the all clear by paramedics . The Company’s general manager said the explosion occurred when a holding tank suddenly released pressure.

The resulting blaze took up to eight fire crews to control.

Mr McGuire said there was no clear cause  for the explosion.

“We are working closely with the appropriate authorities and undertaking a comprehensive investigation into the cause of the accident,” he said in a statement.