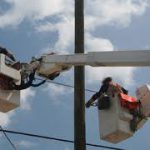 A worker has luckily survived a potentially fatal electric shock when the boom of a concrete pumping truck came into contact with high-voltage power lines.

The building site worker was allegedly controlling a section of the boom in which concrete flows when another part of the device connected with the power line. The Collinsvale incident caused a blackout for approximately 1300 customers before it was eventually restored.Aurora energy spokeswoman, Sarah Baddeley said that the incident should stand as a warning for people to take heed  when using high objects.  Baddeley stated that there were 36 incidents of contact with electrical lines in Tasmania.

In response to these incidents Aurora Energy has launched a “Look up Look Out” campaign aimed at promoting electrical safety.The incident was investigated by an electrical inspector on behalf of Workplace Standards.WorkPlace Standards general manager Roy Ormerod lamented about the high number of incidents pertaining to equipment coming into contact with power lines.

Approximately half of the incidents reported  to WorkPlace standards were in relation to electricity.Other Electrical Safety incidents reported to Workplace Standards included separate incidents in which a tray truck and an excavator came into contact with electrical wires. Fortunately in all of these cases the operators evaded serious injury or death.