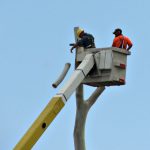 A Myaree tree lopper  was fined following an incident  that resulted in him and another worker being tossed from the bucket of a cherry picker onto the roof of a nearby building. The accused, Gerald Shields pleaded guilty to failing to ensure  a safe work environment as provided for his employees. He was subsequently fined $12,000 in the Rockingham Magistrates Court.

In May 2010, Shields was contracted by the Department of Housing and Works to undertake the tree cutting services. Shields and his employee were looping branches from the cherry picker when the front passenger stabiliser leg sunk into an old drain causing the cherry picker to topple to ground.

The two men were launched from the cherry picker and onto the roof of a nearby building. Shields suffered only superficial scalp injuries but his employee suffered injuries to both his right wrist and forearm.

It was revealed in court that the recommended spread plates were not being utilized  for the stabiliser legs on the soft ground – contrary to operating instructions.  It was also disclosed that the men were not wearing safety harnesses or any other personal protective equipment (PPE) . The court also revealed that Shields did not ensure that employees used PPE at all recommended times.

WorkSafe WA Commissioner Lex McCulloch said the case was a prime example of an employer who neglected the safety of his workers. McCulloch stated that Shields had “no regard for his own safety or that of his employees”.

“A WorkSafe inspector conducted a workplace investigation six months after this incident and found that the safety interlock switch on Mr Shields’ replacement EWP had also been tampered with, this time being held down with a cable tie.”

According to McCulloch 16 WA workers had died as a result of workplace falls in almost 5 years and most cases were almost always preventable.