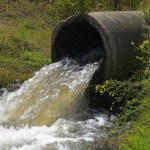 Four unconnected leaks of contaminated water have now occurred at a coal seam gas drilling site near Narrabri in northern NSW since June, according to resources company Santos.The spills lead to the detection of toxic materials such as arsenic, lead, and chromium. Also found were traces of petrochemicals in water and earth samples taken in the area.

After tests last year revealed elevated levels of metals and chemicals, it was revealed that a previously unreported spill of 10,000 litres of polluted water had occurred in June.Santos has recently reported a slew of leaks that have taken place since the company took over the site from Eastern Star Gas last year.Santos claims that their safety practices throughout the site are being upgraded and improved to bring them up to– and beyond, the industry standard.

Conservationists who have visited the Pilliga drilling zone (which is located within one of the last temperate forests in eastern Australia) described the area has degraded and criss-crossed by pipes and gas wells.

Carmel Flint ,of the North East Forest Alliance environment group  stated that much of the vegetation in the area is dying because of contamination, and there are pools of black sludge in the water and ground throughout the zone.According to the state government, an investigation has been in operation for the last eight months and staff members from the industry have conducted inspections of the area two times.