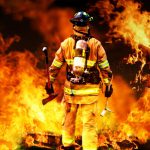 Tasmania is poised to become the first state in Australia to grant firefighters compensation for work-related cancers. The Tasmanian Parliament held a debate with the Workers Rehabilitation and Compensation Amendment (Firefighters) Bill 2013.

For the first time in the state, the legislation will not only cover career firefighters but also volunteers as well. Compensation will cover medical bills and lost wages caused by various cancers listed by the Fed in 2011 as being considered career specific.