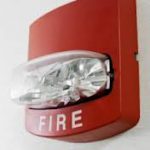 A factory worker is in intensive care at Royal Brisbane Hospital after suffering burns to both his face and torso following a  factory fire in Brisbane.

A firefighter was also injured during the incident.

The Fulcrum factory fire started early in the morning. Fire crews rushed to the scene after it was revealed that the very flammable chemical, methyl keytone was on the premises.

The chemical which is typically used as a solvent was reportedly stored in a locked fire-proof cupboard.

Three people were stuck inside when Fulcrum production supervisor Chris Baker arrived on the scene.

One “long-term, experienced employee” suffered severe burns to his upper torso.  His lungs are also believed to have suffered burns.

According to Fulcrum managing director Graham Scudamore-Smith, this is the first fire of this nature to occur on the property.

“They managed to get him out and into a shower,” he said.

“We are prepared for these sorts of things,” he said.

Queensland Fire and Rescue on call inspector Ted Ireland stated that the cause of the fire is still unclear.

“On arrival they had a fully involved fire on the upper levels and the placement of our lines have been really good, they were able to knock it out really quick,” he said.

“The guys (factory workers) that were here did really well, they shut everything down and self-evacuated.”

“We’ve got a specialised foam pump that’s been repositioned at Annerley for this sort of event,” Insp Ireland said.

“A lot of things lined up to give us a good outcome.”

Scientific officers are now  on site to ensure the dangerous chemicals are contained.