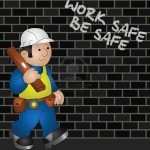 As a result of shoddy  personal protective equipment (PPE), inadequate safety precautions and bad weather, a Queensland floods hero has died. Peter Fenton was a 67 year old tugboat engineer when he was killed by a fallen crate that was being loaded onto a barge.

Fenton, with the help of a colleague, was instrumental in steering away a 200m section of river walkway during the floods in January.An investigation into his death revealed that a hook connected to the crate had a defective spring which stopped it locking into place and allowed the crate to fall on top of him.

Workplace Health and Safety Queensland’s Kym Tollenaere  claims that she discovered the defective spring after the crew told her that heavy wind had caused the fallen crate.However, it was discovered through cross-examination that the health and safety officer did not discover the fault until atleast 7 hours after the death.Mr Fenton was not wearing proper protective equipment at the time.

Ship Master Umesh Madhukar Dalvi claimed that the task was a common job and there was no written safety procedure for it. According to Dalvi, there was however, a written safety procedure to unload a crate, so the crew “reversed” the method to load the crate.Dalvi stated that procedure was usually to shut down the site and warn people that crates were being transferred.He expressed his shock that something of this nature could occur on a usually routine, common job.

The investigation will look into; how efficiently the crate was rigged to the crane, the process used to lower crates, the level of adequately trained staff and the access to protective equipment.

Fenton had previously received a medal for his brave actions during the floods.