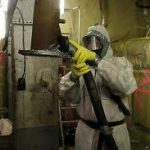 Do-IT-Yourself home renovators are being encouraged to not become the next generation of Tasmanian victims to the deadly substance, asbestos.

Majority of homes built prior to 1990 are expected to have some asbestos and many experts are concerned that most people are completely unaware of the dangers.Asbestos Free Tasmania CEO Susan Wallace stated that approximately 15 people are diagnosed in Tasmania with mesothelioma every year and she is worried that a new wave of victims will emerge out of home renovators.

According to Wallace, Australia has the highest rate of asbestos-related deaths from mesothelioma. She said the number ranges between 600 and 700 annually. She added that a new wave of preventable diseases is emerging in people exposed to asbestos from home renovations.

Occupational Hygienist Caroline Langley said Tasmania appeared to have a higher number of homes with asbestos. Langley stated that they are seeing an increase in the number of individuals who are renovating instead of buying new properties.

In fact,  president of the Asbestos Diseases Foundation of Australia, Barry Robson stated that the number of women developing mesothelioma fell within the renovation boom.

Federal Employment and Workplace Relations Minister Bill Shorten recently announced plans to set up a national office to oversee asbestos awareness and management issues. This agency will be independent of other safety watchdog organisations and will focus squarely on asbestos related issues.