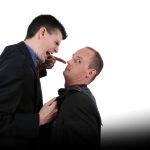 95% of Australian educators have experienced at least one of 42 “bullying behaviours”, say researchers.

Personal confrontation and professional destabilization are most common, commonly resulting in deterioration of not only mental health, but also physical well-being.Dan Riley, Deirdre Duncan and John Edwards surveyed 2529 school educators, 83% female and 27% male.
The researchers discovered that 81% had experienced bullying from parents, and a staggering 79% named colleagues and executives, 1 in 15 being principals. Students are also bullies, with educators reporting that 75% had experienced bullying from a pupil.
Research shows that questioning of decision-making is one of the biggest bullying behaviours, followed by assignments with impossible to meet deadlines. Many of those surveyed did not realize that these behaviours were considered bullying.
Belittling of work, lack of recognition or praise, and witholding of information were also commonly reported bullying behaviours among those surveyed.
These statistics have been published by Australian Council for Educational Research.
More information on Bullying or any other Human Resources issues
Source: http://www.dailytelegraph.com.au/news/teachers-suffer-bullying-in-nsw-schools/story-e6freuy9-1226350155460