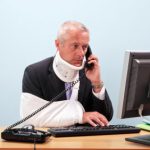 Some of the nation’s most prominent businesses fear newly proposed rules on workplace bullying which they fear will force them to monitor the social networking of employees, which could also expose themselves to bullying claims by workers.

Safe Work Australia released  a draft code of practice on bullying,  but a coalition of 200 companies – many in the top 100 – are rallying against a code that could be used in court actions, alleging that bullying is extremely subjective and employee social media is out of their control outside of working hours.

The companies feel that social media the number one weapon bully’s use  but if they monitor social media pages of their employees, that in itself could be construed as bullying.

The draft code reports that bullying can be done via email or text messages, internet chat rooms, instant messaging or other social media channels.

Safe Work Australia report that the implementation of the code could cost the country $237 million at first, but then $104m a year after that. They believe this is much better compared to the estimated  $6 billion and $36bn cost to business because of bullying.

The office of Workplace Relations Minister Bill Shorten remarked that feedback on the code would be  “appropriately considered in due course”. The office said the government had recently introduced provisions to the Fair Work Act to tackle “the scourge of workplace bullying” as it had a dreadful human cost and was a significant cost to the economy.