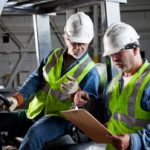 Almost 20 thousand  Queensland factory workers  suffered injuries in the workplace in the past fiscal year which resulted in approximately  $204 million in disbursements from WorkCover.

While less than 12,000 claims were made by construction workers,  their payout were in excess of $201 million and were responsiblefor 16 per cent of all claims.

Workers in the metals, plastics and meat processing areas are considered to be the highest risk in the manufacturing sector according to the insurer’s yearly repor. t

Queensland secretary of the Australian Manufacturing Workers Union, Rohan Webb, claimed to have expected the injury report for  2011/12 financial year to be high, “but not that high”.

He attributed the problems to companies who appoint on-site safety managers who lack the proper training for the role.  He also targeted companies who  fail to properly guard machinery.

“When a safety representative is elected by the workforce we seem to get better results and better safety, Mr Webb said.

He said occupational health and safety standards had weakened with a relative explosion in small- to medium-sized manufacturing operations across the state.

“Unfortunately employers say safety is paramount, but they’re quite quick to cut a corner if it means upping production,” Mr Webb said.