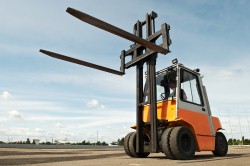 Two NSW companies – a bakery and a transport company – have been fined for failing to ensure proper workplace health and safety, following a forklift accident which occurred in April 2007.

The incident involved a 51 year old truck driver, who was pinned between a forklift and a trailer after the brakes on the forklift failed, causing it to roll backwards down a metal ramp. The man suffered injuries to his lower back, abdomen and pelvis.

After a thorough investigation into the accident, WorkCover NSW has found both the injured man’s employer and the bakery at which the incident occurred were in breach of the Occupational Health and Safety Act.

WorkCover’s Work Health and Safety Division General Manager John Watson says that both parties were at fault for the incident. The transport company did not provide proper forklift safety training to the driver prior to the use of the forklift, while the bakery failed to provide workers with a safe method of loading and unloading bread.

While the bakery did provide a metal ramp for the purpose of unloading bread, it too was found to be defective. As the ramp could not be used, the truck driver instead opted to use the defective forklift.

“Machinery like forklifts should be the subject of periodic inspections with preventative maintenance systems in place so that the risk of serious injury or death is substantially reduced,” said Mr Watson.

Mr Watson says the incident is an important reminder to SME-sized trucking businesses about the need to ensure all workers are kept safe when operating machinery or transporting goods.