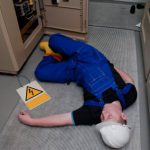 A young worker was able to hold the projectile while crews freed him, despite having a steel rod lodged in his head.

The young man was working at the Lindfield site, breaking concrete with a 21-tonne excavator when a metre-long piece f steel rod flew from the debris and embedded itself between his eyes.

Emergency crews rushed to stabilise the man, who was conscious and coherent through the entire ordeal.

He remained holding onto the rod as crews attempted to free him from the excavator,

He was quickly taken to the Royal North Shore Hospital, where surgeons mulled over the best way to remove the steel rod.

According to  Ambulance Service of NSW district manager,Mark Hayes; it took crews an entire hour to get the man out of the excavator.

‘Because we had to remove all the hand controls and the foot controls so that we could actually take him out through the front of the machine,’ Mr Hayes told Fairfax Radio Network.

The Construction, Forestry, Mining and Energy Union (CFMEU)  reported that the man had the front window of the cab open when the incident occurred.

‘It was down at the time and that’s how it (the rod) flung through his skull,’ CFMEU NSW State Secretary Brian Parker told AAP.

WorkCover will investigate but the incident appears to have been a freak accident, Mr Parker said.