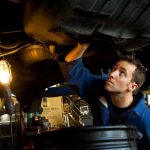 A mechanic from worth is being forced to shell out $3200 for a workplace accident that resulted in serious head injuries on a 16-year old.  The mechanic, Paul Egerton has pleaded guilty for charges alleging that he failed to take reasonable care to avoid negatively affecting the safety and health of another individual. The injuries of the young occurred when a bus fell on top of him.

Egerton was employed as a heavy duty mechanic for Path Transit when the incident happened.

Despite the company’s written procedure prohibiting employees from working beneath a bus when it was jacked up, Egerton permitted his two apprentices to do so.The bus was allegedly being jacked up using two wooden blocks while the apprentices were underneath it conducting their work.The bus rolled onto the apprentice causing injuries to his head and chest when they were pinned below it.

WorkSafe’s Lex McCulloch stated that Egerton should have known better considering his ample experience in the field.