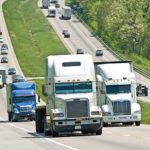 A POLICE operation targeting truck drivers has uncovered more than 1300 offences in South Australia, including drug use and tampering with speed limiters.

A police operation aimed at truck drivers revealed over 1300 offences in South Australia such as drug use and speed limiter tampering.

Police are now trying to determine whether trucking companies were  privy to the offenses after over 2300 truckers were stopped last month.

Traffic Support Branch Inspector Andrew Thiele made it clear that despite these discoveries, the majority of operators were respectful towards the law.  Thiele said the focus is going to shifted towards the small demographic of truckers who continue to disobey and disregard the law.

Of the 2374 trucks that were stopped randomly, 97 of the drivers were reported for speeding or driving recklessly.25 other individuals were discovered to be in possession of drugs while 11 were driving while disqualified.

Polie have also reportedly defected 497 vehicles. Thiele said they will be working in conjunction with interstate colleagues to try and solve this national problem.