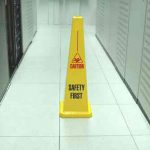 A safety raid on building sites in north Canberra has resulted in several improvement notices and on-the-spot fines.
The raids were organised by WorkSafe ACT inspectors and were reportedly a part of an continuous campaign to improve safety in the construction industry.

In excess of 80 improvement notices and infringement notices were issued midday and the tally is expected to rise according to WorkSafe Commissioner Mark McCabe.

He says inspectors are finding the same type of  problems throughoutmost building sites.

“There’ll be a lot of issues associated with sites not being fenced with no amenities for workers, fall from heights issues and electrical issues – those last two are quite important,” he said.

“The on-the-spot fines were largely about lack of signage on sites.”