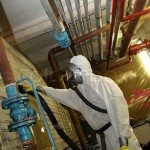 Talks  intended to solve Canberra’s buried asbestos crisis have  come to a standstill after  the territory government accused the Commonwealth of double standards.

Both sides are now deadlocked on determining who will shell out  hundreds of millions of dollars to clean up over 100 sites around the capital where deposits of the fatal building material might have been buried for decades.

Chief Minister Katy Gallagher says the federal government has funded elaborate asbestos removal operations on various contaminated sites but is negating  responsibility for others. Gallagher is appealing to Prime Minister Julia Gillard to get involved.

Regional Affairs and Local Government department stated that they are developing a national solution to buried asbestos.

The deadlock creates difficulties for Canberra’s important urban renewal project, the East Lake development in Kingston. It was all set for medium and high-density housing for up to 8000 occupants.  There is reportedly, over 600,000 cubic metres of contaminated soil at the East Lake site. Much of the waste are remnants from the construction of the Parliament House. The estimated cost for cleanup is $90 million

The Commonwealth has allegedly refused to assist in the cleanup, arguing that the ACT state-government must accept responsibility. Ms Gallagher said the Commonwealth had cleaned up polluted land at Kingston Rail Yards, on former National Railways land and that defence sites at Bonner and Lawson had been remediated at federal expense. To refuse to fund clean-ups at other sites was ”inconsistent.”

Ms Gallagher said the talks between the two parties, convened last year after she threatened to sue the Commonwealth, had broken down but that the territory would not stop pursing an agreement with the federal government.

”I consider the Commonwealth has a moral and financial obligation to the citizens of the ACT to assist in remediation of sites contaminated prior to self-government,” Ms Gallagher said.

”The Commonwealth has accepted responsibility for remediation in a number of cases on an ad hoc basis.”

There  are said to be approximately 114 former landfill sites that are contaminated, leading to problems for the sites construction.

A spokesman for the Department of Regional Australia and Local Government said that a national plan was being developed for the management of buried asbestos.

”We established the Office of Asbestos Safety in September 2012 to respond to the broad-ranging Asbestos Management Review and to develop a national strategic plan by 1 July 2013.