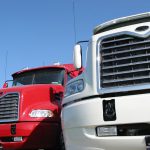 A surge in serious truck accidents on one of Australia’s busiest transport routes has caused conflict over who is responsible.

The Hume Highway between Sydney and Melbourne is one of the country’s major supply routes and is now one its most fatal.

Approximately nine trucks have been wrecked on the north-east Victorian stretch in recent weeks – seven within 10 days.

The most recent accident involved a postal truck which  struck a tree and caught fire north of Violet Town The driver did not survive.

Senior Sergeant at Seymour Police Station, Ralph Willingham, believes the problem stems from a lack of resources to combat driver fatigue. WIllingham does not attribute the recent collisions to engineering problems rather, he believes them to be caused by fatigue management issues.  He attributes these issues to the industry being under tough economic pressure to “do more in less time” and believes all signs point to fatigue-related causes.

The Victorian Road Authority, VicRoads, works together with the police to enforce road regulations for Trucks.

David Shelton, the director of road safety at VicRoads, says the latest run of accidents is concerning.

“We are looking at whether we can actually do a more enhanced crash investigation process to better understand the underlying reasons why these crashes are occurring,” he said.

“We’re starting specifically in the north-east, and at the moment we’re at the point of saying what sort of methodology – how would we actually examine this?

Shelton believes in order to combat fatigue everyone needs to work together with transport operators to gather information that only they would be privy to — which would help them to understand the root causes of the problems.