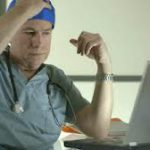 Tasmania’s ambulance workers are reportedly at risk of being “worked into the ground” because  of a dramatic increase in overtime.

Tasmania Liberal party health spokesman Jeremy Rockliff cited leaked statistics that showed ambulance workers were on the job a total of 3469 hours overtime in the first two months of 2013 in southern Tasmania. He states that the data also shows that at least 30 crew shortages occurred and sometimes service was cancelled completely.

“This is clearly an ambulance service in crisis,” he said.

Rockliff emphasized that staff were under stress which could potentially result in a workplace accident.

“As one paramedic put it in a recent survey: ‘It’s only a matter of time before a staff member crashes a vehicle or suffers major ill health due to exceeding their stress-fatigue limit’,” Mr Rockliff said.

The Government stated an additional $48 million had been spent on ambulance services over four years, but demand for services was on the rise.

To cope with the demand, an additional 18 paramedics have been employed since December and 12  more are expected to  be employed in April.