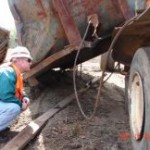 A truck driver from Victoria was impaled by a 2 metre high fence when he tried to jump over the barrier in order to fetch his keys.

Colleagues had to hold up the 30-year old until emergency workers arrived at the scene and freed him.Upon reaching the Alfred hospital, the man still had a large spike puncturing his leg. He will undergo surgery shortly.

No word yet on if there will be any investigations int0 any breach of occupational health safety procedures. The man was found by paramedics to be in considerable pain. He was subsequently given pain relief through an inhaler and later, a drip through his arm with more pain medication.

In order to cut him out, the fire services had to leave the metal spike in his leg.