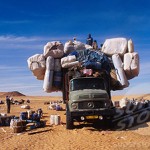 Truck drivers claim that the only way to make ends meet is to disregard speed limits, over pack their trailers and neglect truck maintenance.

A survey conducted by the Transport Workers Union displayed that 56 per cent drivers had to neglect vehicle maintenance because of the weight of the economic pressure. Approximately 30 per cent explained that they had to drive well over the speed limit, and 40 per cent believed they had to work longer than is legally permitted. 17 per cent claim they felt pressure to hold a illegally outsized truck load.

Union secretary Tony Sheldon stated that the results confirm a growing crisis throughout the industry.

According to Sheldon, there has been an increase in fatalities.In 2010 there were 142 countrywide deaths as a result of crashes involving trucks. Other stats indicate that 72 per cent of all car crash deaths involving trucks were the deaths of occupants of other vehicles.

The survey was conducted with the involvement of 715 transport workers and included included long and short-haul drivers and couriers.The union desires an independent industry body to monitor pay rates, contracts and working conditions to ensure the mental and physical well-being of drivers. There was no mention in the article regarding the newly introduced national trucking regulatory body.