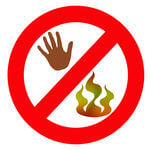 A man has been airlifted to Adelaide where he will receive emergency treatment for serious burns he received in a fire. The man has suffered burns to approximately 60 per cent of his body, but he is currently in stable condition.

Another worker was with him, and also suffered serious burns. The two men were performing a normal cable maintenance job when contact with an 11,000 –volt cable caused an explosion and a fire.Both men reportedly  had to be hosed down by the firefighters and had to be cooled. Fire officer , Paul Miles stated that both men appeared to be seriously burnt ,however they remainedconscious.Reports allege that the scene appeared to be very “nasty” and one of the workers appeared blackened.

The explosion created a power outage that left 500 customers without electricity.The Fire Safety incident is currently being investigated by WorkSafe, however an independent inquiry indicated that this was a likely scenario brought on by a lack of funding.