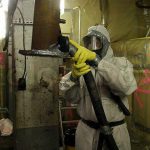 Reports have indicated that unions intend on pushing for the creation of a National Asbestos Authority to help protect people, and remove asbestos from homes and businesses.

Lifelong campaigner against Asbestos, Paul  Bastian will meet with Prime Minister Gillard and Workplace Relations Minister Bill Shorten to discuss the case. The Australian Manufacturing Workers Union national secretary, Bastian said more Australians died from asbestos exposure than in World War II.Bastian believes that the number of people and legal matters dealing with asbestos surely indicates that the problem must be dealt with. The union believes the best way to deal with this problem is a federally funded authority to manage the asbestos awareness, asbestos removal and to protect people from the dangers of the deadly substance.

The goal of the authority, according to the union would be educate the community about the existence of asbestos in private homes, businesses and public buildings. Bastion also mentioned the need for an immediate audit and plan to remove asbestos from all government buildings. He cited State government’s common reports of low levels of compliance with asbestos regulation, as reason for the need for a federally funded scheme to treat the issue as one of critical importance on a national scale.

Shorten recently mentioned that asbestos was indeed a critical issue for the government which is evident by their recently commissioned asbestos management review. The government currently awaits the report’s recommendations which is expected to be released later this week.