Bullying in the work place took a new twist when Dean Hutchinson was smacked with a 30cm piece of wood across the temple of his head.During interviews with The Age, Mr Hutchinson has allegedly said that the supervisor would fire a nail gun at staff without saying if it was loaded, docked his pay Mr. Hutchinson took a colleague to the hospital, had cardboard and wood thrown at him and other staff, not provided with fans during hot summer and also not allowed to bring their own. Importantly staff were not supplied with many essential safety equipment and had to purchase other equipment at inflated prices ($8 a pencil). Pay also was docked if time was taken to clean tools and staff were “warned” not to join a union. WorkSafe is currently investigating these claims. If the claims are proven true, CFMEU furnishing products secretary, Leo Skourdoumbis described it as the worst bullying case he had seen in his 20 years as a union official and accused the employer of exploiting a workforce. 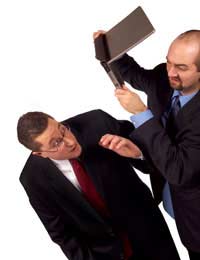