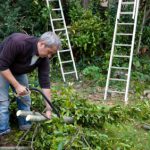 Hobart City Council is looking into an incident involving a worker who fell out of a tree outside of the Parliament House. The Arborist from Royal Tasmanian Botanical Gardens was allegedly performing  tree surgery work on the elm which had suffered damage from recent fierce winds.  While operating on the tree, the arborist lost control and fell approximately 5m to the ground.

Gardens director, Lesley Kirby stated that she was informed the man was not critically or even seriously hurt,  but he is receiving assessment from the Royal Hobart Hospital.

It is believed that the worker was wearing a safety harness and helmet at the time of the accident.

It is currently unconfirmed what caused him to fall.

The arborist was contracted by the council to cut down and assess the safety of the large elm trees.

The individuals were contracted following the strong winds that brought down a tree in the Salamanca Market.  Council General manager Nick Heath stated that the number one priority at the moment was  ensuring the safety of the trees.

Working at Heights incidents remain one of the most frequent sources of workplace injuries.