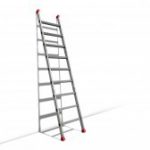 An electrical merchant was slapped with a $90,000 fine following the death of a female worker who fell through the ceiling of the store in 2010.Personal Buying Service Pty Ltd pleaded guilty to failing to ensure and uphold a safe work environment, and by that failure, triggering the death of a worker.

The store encompassed a large warehouse with a showroom throughout the floor area. The ceiling of the showroom was approximately 2.75 metres high  and was about half the height of the warehouse. The space between the showroom ceiling and warehouse roof was often used for storage purposes for boxes and stock.Use of the ceiling to store boxes prior to 2007 had caused the ceiling to sag so a separate storage shelf was built to store the boxes.Employees were able to access this new storage area via a 1.8 metre ladder, which would require them to stand on boxes of stock. The shelf was not designed for individuals to stand on but employees say  they sometimes had to in order to retrieve the items.

In September 2010,  a female worker was assisting another worker in retrieving a washing machine box from the shelf. The female worker placed the step ladder on top of an empty box which eventually gave way, causing her to fall and suffer fatal injuries.

WA Commissioner Lex McCulloch said the untimely death was a reminder that strick safety procedures must be implemented especially when involving working at heights.
Source: http://www.watoday.com.au/wa-news/retailer-fined-90000-after-death-fall-20120731-23bsy.html#ixzz22dEfAfTr