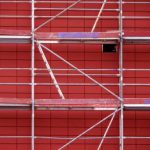 A company  was fined for an incident which resulted in a worker sustaining skull and spinal fractures when he fell almost 3 metres onto a concrete slab.

Access Matrix Scaffolding was fined  $22,000 in the Perth Magistrates Court for failing to provide a safe work environment  which resulted in an injured worker.

The company supplies and  builds scaffolding, and the incident in question occurred when a void in a floor was left unfinished and covered with particleboard.

A worker stepped onto the void with the assumption that it was supported by scaffolding and the void collapsed under his weight. He fell 2.7 metres onto the concrete slab, where he sustained the skull and spinal fractures, as well as injuries to his ribs and shoulder.

Despite the particleboard being in place as flooring, the board was spanning a greater length than th manufacturer recommended.

WorkSafe WA commissioner Lex McCulloch said that the case should act as a reminder to the importance of having preventive measures to avoid falls.

According to McCulloch, falls are one of the most frequent causes of workplace death in the construction sector. In the last four years, 16 workers have died as a result of falling.