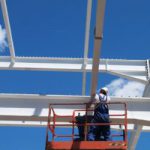 Safework has released a press release detailing the events surrounding the injuries suffered by a student who fell while working at heights. According to the courts,the Department of Further Education, Employment, Science and Technology to blame for his injuries.
DFEEST has been fined $120,000 by the Industrial Relations Court following the injury of the student.

DFEEST, the agency responsible for TAFE, pleaded guilty to breaching section 22(2) of the Occupational Health Safety and Welfare Act 1986 by failing to ensure the student’s safety, failing to provide fall protection and failing to conduct and document a proper risk assessment for the task.

The incident occurred at the Gilles Plains campus in November 2009, when a construction student  walked across and stood on ceiling beams to help remove a panel. The student lost control and fell 4.5 metres through exposed plasterboard to the floor. He broke several bones and suffered serious and permanent injuries. It was revealed in court that while DFEEST did conduct an internal investigation and amended its Working at Heights and Hazard Management policies, the amendments did not go far enough to explicitly state the proper safety measures that would be necessary to avoid a similar incident.

The court fined DFEEST $120,000 (following a 20 per cent discount to account for an early guilty plea and expression of contrition) and also ordered they pay compensation of $20,000 to the student.