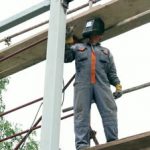 A Worksafe investigation is being conducted at a Hazelwood Power Station following an incident involving the injury of a worker. The maintenance worker suffered significant head injuries following his 2.5 metre fall. Emergency Services stablised the man prior to airlifting him to Alfred Hospital where he remains in stable condition.

The worker is employed by Hazelwood’s major maintenance contractor Fluor. He is believed to have been spotting a maintenance taks on a station boiler when he fell.

Mantenance unions and Incolink counsellors have visited the site where they are assessing the situation and assisting the injured worker’s colleagues wherever needed.

A spokesperson for GDF SUEZ Australian Energy, the owner operator of Hazelwood Power Station, said the worker was in the vicinity of a bunker when the incident occurred.