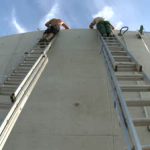 Serious falls in the ACT over the past year:

■ In July 2012 a painter fell 3.5 metres from scaffolding at a house site in O’Connor, resulting in broken bones.

■ In August 2102 a worker fell through a collapsed house roof in Bonner.

■ In September 2012 a formworker fell 2.4 metres at a house site in Harrison, sustaining head and vertebrae injuries.

■ In September 2012 a worker at the Cotter Dam who was working on the dam’s abutment face fell 3.4 metres.

■ In September 2012 a worker fell 4 to 5 metres from a ladder when he received an electric shock while working on a roller door in Phillip.

■ In October 2012 a worker was lucky to sustain only minor bruising and grazes when he fell 4.5 metres from a ladder in Mitchell.

■ In October 2012 Jason Bush sustained significant injuries when he fell 5 metres into a lift shaft when working at the Nishi site.

■ In February 2013 a worker suffered a broken hand, elbow and shoulder when he fell 3 metres from a ladder in Gungahlin.

■ In February 2013 a fire systems worker fell through a roof space in Red Hill when a truss gave way.

■ In March 2013 a worker sustained broken ribs when he fell through a fan duct penetration in a roof at Chapman.